On Tuesday, Communities United (CU) leaders released an analysis examining the impact that the Mayor’s property tax increase would have on renters. The analysis titled "The City That Works...For Who?" shows that the increase could be devastating for renting families and communities of color if solutions are not put in place to prevent rents from becoming completely out of reach for Chicago’s low-income and working class families.

“We are getting hit from both ends," CU parent leader Merced Alday said at a press conference about the report's release.  "While rents increase, we are losing critical city services. My daughter’s school was forced to lay off multiple teachers this year. It’s not fair to balance the budget on the backs of low-income families," she said.

Mission minded Albany Park landlords like Helen Slade will have little choice but to raise rents to cover the increase. “We have worked really hard to keep our rents affordable for working families in the area.  However, this increase will force us to raise our rents and may push working families out of our community,” she said.

"Consistently we've turned to those who have the least, and this budget continues to do that," 35th Ward Alderman Carlos Rosa said. "We need a budget that protects working families."

Leading up to yesterday's budget vote, Communities United engaged over 300 residents in a series of townhall meetings in  Albany Park and Belmont Cragin.

All but one of CU's Aldermen (Ald. Laurino) voted against raising  Chicago's rents!  Thank you to Aldermen Rosa, Mell, Silverstien, Villegas and Santiago for doing what's right.

IT'S NOT TOO LATE TO TAKE ACTION!

Though the proposal passed on Tuesday, the full rent increases will not take effect right away. Community leaders called for Aldermen and the Mayor to develop solutions that address the housing challenges faced by cost-burdened renters throughout Chicago, as rent in the city will increase when the property tax increase takes effect.  Communities United will follow up with Aldermen and the Mayor's office to ensure action is taken to protect our city's renters!

To learn more or to get involved in these efforts, email Nick Jefferson, Communities United's housing organizer by clicking here. 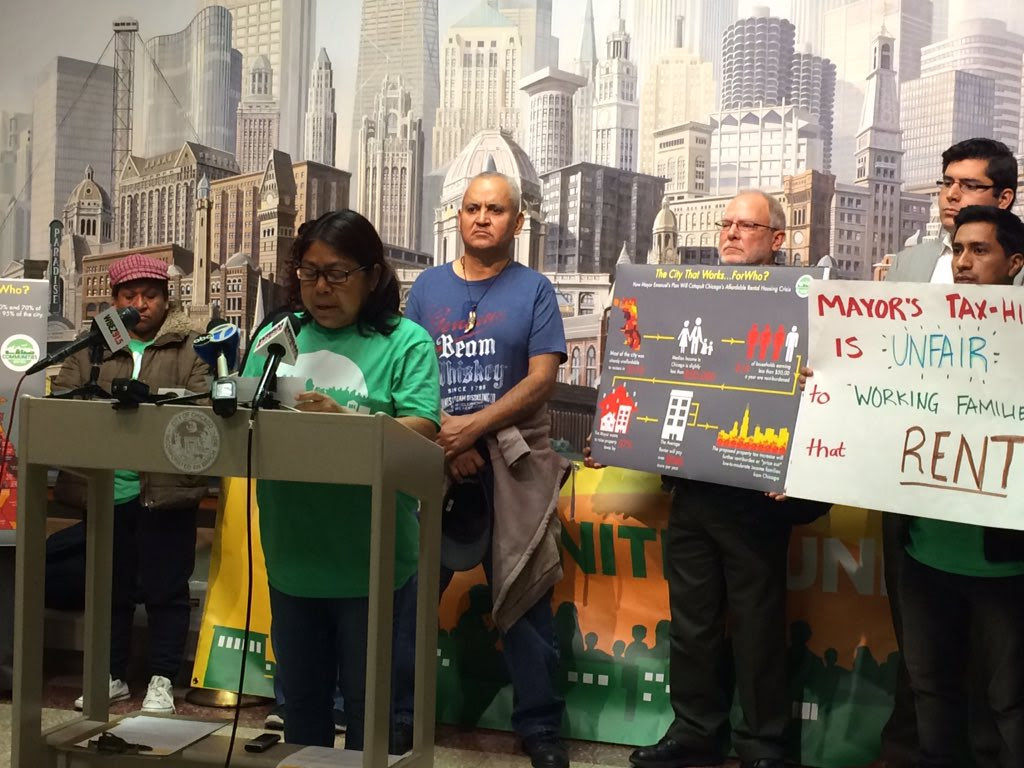 "The City That Works...For Who?" Key Findings:

1) The property tax  increase will threaten affordability across Chicago's rental market as landlords pass off added costs to renters. Rents in certain parts of the city could increase up to $100 per month according to CU's analysis

2) The increase will add to the city's affordable housing crisis by broadening the pool of "cost-burdended" renters in Chicago. Chicago’s median income in 2014 was slightly under $50,000 according to the US census. In 2014, three-out-of-four renter households in Chicago that made below $50,000 a year paid more than 30% of their income towards rent. Sixty percent of these households spend more than half of their monthly income on rent.. The increase will further this crisis

CU In The News!

DNAinfo Radio Chicago: How tough will property tax increase be on renters?